Are Air Source Heat Pumps the Betamax of Home Heating?

It was a little bit before my time but in the late 1970’s and early 1980’s electronic manufacturers were fighting it out to establish a dominant format for home video. Now I appreciate that this is a surveying blog, so you will need to bear with me whilst I work my way to the relevance of the comparison.

VHS was a format developed by JVC. It was relatively simple and accessible which meant that devices which utilised it were more affordable and readily accessible to consumers. Betamax was a product of Sony; a better-quality option but limited to their own devices meaning more cost to the consumer.

Ultimately VHS won the format war; being more widely adopted by the public and as a result, seeing much better support from publishers. Betamax, with its lower level of adoption could not compete. The consumer market made its choice and demonstrated that simply being the best technology of the time is not necessarily the path to victory.

More recently we have seen format races in other sectors. Take the motor industry which has had a real shift in focus towards battery electric vehicles following the introduction of Tesla to the market.

Ten years or so ago, the motor industry was very indecisive on how they would decarbonise their products. Should they go for Hydrogen fuel cells or battery technology? Both options had their pros and cons, but Tesla were decisive and committed to battery technology. Their genius was not to simply release this technology into the wild and hope that consumers would adopt, it but to build a market leading infrastructure network to support it.

Getting on for a decade later, the established manufacturers are adopting the same technology as Tesla but playing a game of catch up when looking at range, charging time and performance. Tesla created market confidence in the technology and as a result, carved their own share from the established brands.

So how is this relevant to the property industry?

How is this all relevant to property? Well earlier this Autumn the government announced new incentives to encourage the adoption of Air Source Heat Pumps as a way of decarbonising the property sector. This is not new technology and as a surveyor, I have come across it in a number of residential applications, taking the opportunity to speak to homeowners about their experience.

Generally, the feedback is mixed; some have been hugely impressed with the efficiency, but others have highlighted the considerable cost of adapting their homes to suit the system and install it, but more-so highlight the lack of specialist contractors who can install and service the equipment.

The more obvious technology available is Hydrogen or more specifically; Hydrogen Enriched Natural Gas (HENG). This is a technology which can be readily adopted within our existing gas distribution network and by our existing home heating systems meaning that for the consumer, there is no need for an expensive upgrade to their heating infrastructure or even their insulation provision. The technology has already been demonstrated as workable at a 20% hydrogen to gas mix and this could be taken further subject to boiler technology and distribution network upgrades.

Superficially therefore, this seems like a far better solution, our VHS for heating.

Unfortunately, Hydrogen does not occur naturally; at least not in a way where it would be commercially usable. Its production requires a considerable amount of electricity, well beyond what could reasonably be generated through renewable sources meaning that we would remain reliant on fossil fuels. The result is that the cost of manufacturing it would outweigh the benefits over switching to an electric heating solution. From my research, the return on energy investment is only around 50%

Perhaps the solution then would be an electric boiler. Yes, you can actually buy electric combination boilers and these can be a direct replacement for a more conventional gas boiler with minimal alteration. These have the benefit of a relatively low initial cost but are far less efficient than a heat pump. A heat pump can technically produce about 300-400% of the energy in heat that it consumes in electricity. An electric boiler only produces about 90-95% so would be considerably more expensive to run. 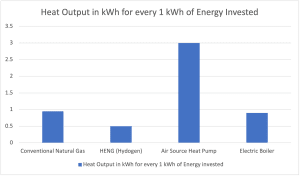 In fairness, at 90-95% efficiency, an electric boiler is no less efficient than the gas boilers most of us current rely on, but energy costs are such that gas boilers remain cost effective….at the moment.

Hydrogen, whilst potentially good at reducing carbon if produced using renewable energy, provides a particularly poor return on investment in terms of the energy output.

Clearly there is a great deal more to be said about all of the technology discussed here, but the takeaway point is that heat pumps are perhaps the most efficient heating technology available to consumers today and their real limitation is the initial cost.

As I touched on earlier, the government is offering a modest financial incentive to consumers who adopt this technology but whilst the technology is relatively new and finding its place in the market, I would certainly be cautious about investing considerable sums of money in adopting it.

Is there an alternative strategy for government investment?

Frankly I believe the government strategy is wrong; simply incentivising consumers will not encourage mass adoption of the technology. Consumers are wary of investing in failed formats, even with government grants. There is also a perception that the price simply rises to eat into a sizable chuck of the grant money. A lack of competition makes it far easier for suppliers to do this unnoticed.

Instead, we need to see wider support from local trusted traders. We need to invest to upskill our existing plumbing and heating engineers to install and service this equipment. This would ensure that consumers who do adopt it have affordable local choices and are not limited to a select number of specialist contractors who can name their price.

If this technology becomes widely offered by your local gas engineer who normally does your annual boiler service, you as a consumer will feel more confident about it. This will help the technology to grow; encourage other manufacturers to enter the industry and help to reduce the cost and improve the efficiency.